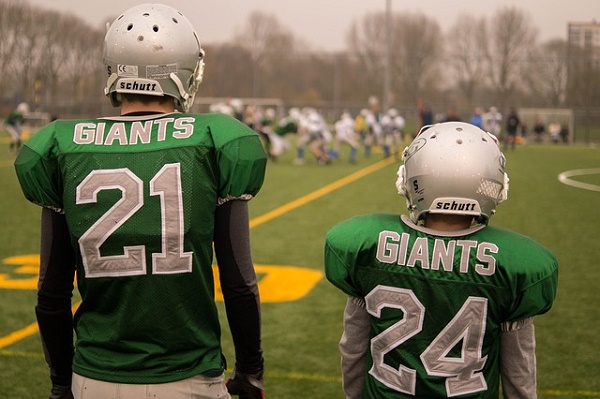 Need team-themed t-shirts and other clothes? Design your own and print them cheap here in our design studio.

A sports team is nothing without a great coach to guide them. You’re equal parts leader and mentor; equal parts drill sergeant and friend. It’s a difficult job, but also an immensely rewarding one if done right.

“Sports coaches assist athletes in developing to their full potential,” reads a piece on Top End Sports. “They are responsible for training athletes in a sport by analyzing their performances, instructing in relevant skills, and providing encouragement.”

Part of that training involves drills, physical exercise patterns designed to promote athletic growth.  Today, we’re going to go over a few of the more brutal – and brutally efficient – exercises you can use to hammer the members of your football team into better, more hardened athletes. Note that this is just a balanced sampling; there are tons more drills out there on the web just waiting to be discovered and adapted for your team.

Our first exercise, courtesy of The Art of Manliness, is rather fittingly known as The Gut Buster. This one’s all about fitness and endurance. It requires the following steps:

If this drill doesn’t get your team in shape, then nothing will.

Our next exercise was pioneered by NFL player Patrick Peterson, and is a play on the standard Speed Ladder exercise, which is meant to improve speed and agility. Setup is simple, and requires nothing more than a simple rope ladder. It goes something like this:

You can see a video of the drill in action here.

Technically, this drill is actually two different drills combined into one. The first half, known as the Kettlebell Lateral Lunge, strengthens the core and back while improving hip, leg, and groin flexibility. It involves the following steps:

The Kettlebell Bulgarian Squat, meanwhile, increases lower body strength and improves both stability and balance. To perform it:

A favorite of running back Chris Johnson, resisted high knees improves the stride length and sprint technique of anyone who uses it. To run this drill:

You can see how the drill looks here.

Though a speed/agility drill like the uphill speed ladder, the X-drill focuses much more on improving footwork. It requires the following steps:

Check it out here.

The drills outlined here are far from the only ones you can put your football team through. These are just designed to get you started. As a coach, it’s up to you do do a bit of research into what drills might work for your team – and to invent a few of your own in the process.

Need team-themed t-shirts and other clothes? Design your own and print them cheap here in our design studio.