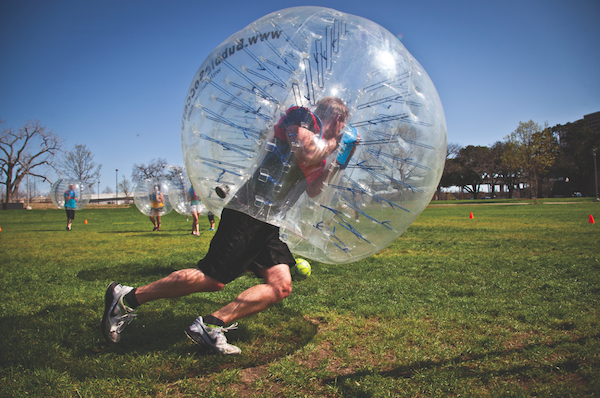 Need team shirts for the upcoming season? Try our interactive Design Studio. You can browse hundreds of options, or upload your own logo.

The New Year is here, which for many means it’s time to make those resolutions. Hopefully last year’s went well, but even if they didn’t, the beginning of the year allows for us to wipe the slate clean and begin again. It’s an opportunity for us to make changes, try something new, and put a fresh spin on the upcoming year.

According to a Nielsen poll taken at the beginning of 2015, the top 5 New Year’s Resolutions were:

Some of those goals may seem a bit arbitrary, but our guess is that a few of yours would fall under those categories. The good news for you is that there’s one decision that can help you achieve all of those at once: join a recreational sports team.

While you have all of the usual options of basketball and volleyball and bowling, it’s 2016, so we suggest taking a risk and trying one of the following new and exciting sports. 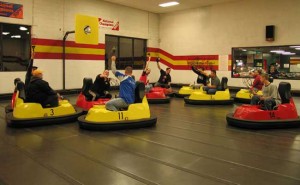 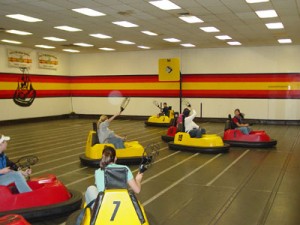 What do you get when you combine basketball, lacrosse, and bumper cars? The high-stakes, low-skill world of Whirlyball! The game was first conceived in Salt Lake City in the early 1960s, but has just recently begun popping up across the country. The game is played on a 80′ x 50′ court with each player riding a Whirlybug (electric powered bumper car) and carrying a scoop, with which he or she can pass the ball to teammates and shoot at the goal, a circular target above the two opposite ends of the court. Players are not allowed to leave their cars or to touch the ball with their hands. Other than that, almost anything is allowed, within certain bounds of safety, of course. 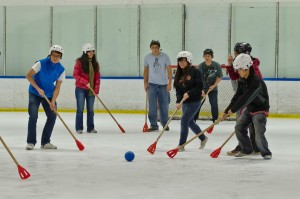 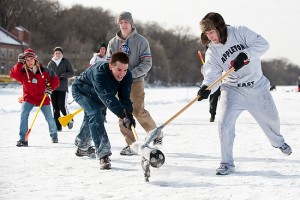 If you haven’t tried broomball, you are missing out! It’s time to strap on your shoes, yes shoes, and jump out on the ice. Broomball is like floor hockey, only played on ice. It follows many of the same rules as hockey, but also incorporates some soccer strategies. The game is typically played on a hockey rink with two teams consisting of six players on each side (a goalie, two defensemen and three forwards). A player uses a stick with a molded broom-shaped head to maneuver a six-inch diameter ball up and down the ice. Instead of skates, players wear spongy-soled shoes to gain traction when running on the slippery surface. The object of the game is simple: score more goals than the opposing team. 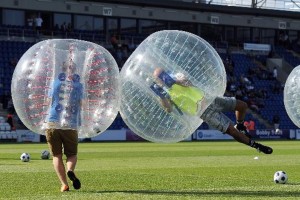 The Germans call it Loopyball, while other countries in Europe call it bubble football or bubble soccer.  You’ve probably seen a video of it shared by one your friends on social media, which is actually how it got started. Henrick Elvestad and Johan Gold, hosts of the Norwegian comedy sports show Golden Goal, posted a video of them playing the game on YouTube, and its incredible popularity sparked the birth of a new sport.

The game itself is a cross between soccer and zorbing, a sport where an individual rolls down the side of a hill or sometimes a level surface in a giant plastic orb. The plastic orb surrounding the player in bubble soccer is similar in construction but differs where these allow the player’s legs to run around freely or essentially wear the orb. The objective of bubble soccer is to score against your opponent’s net and knock each other down while trying. The game starts much like a competitive game of dodgeball. When players hear the whistle, they fearlessly rush into the center to find and kick a soccer ball through their suit. The ever-increasing amount of sweat will eventually make visibility an ongoing struggle because the exercise is real and this IS most definitely a sport. 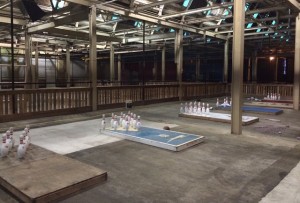 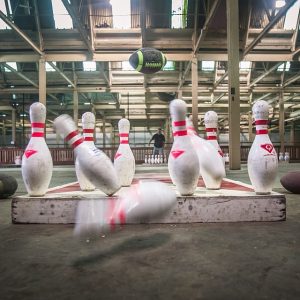 This fusion of three of America’s most popular pastimes – football, bowling, and horseshoes – is quickly catching on. Fowling, as the game is known, has just a few simple rules: two teams set up bowling pins across from one another and take turns trying to knock each other’s pins down by throwing a football. The first team to knock down all of the opposing team’s pins wins. If the rules sound pretty similar to beer pong, that’s because inventor Chris Hutt created the game while tailgating at the Indianapolis 500. 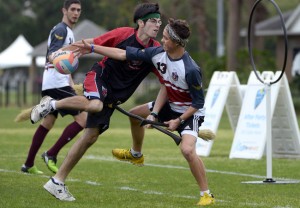 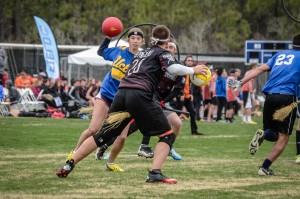 Yes, that Quidditch. While sadly this version doesn’t involve flying, fans of the Harry Potter series have turned the general idea behind Quidditch into a legitimate sport that’s taking off on college campuses around the country. It’s a co-ed contact sport with a unique mix of elements from rugby, dodgeball, and tag. A quidditch team is made up of seven athletes who play with brooms between their legs at all times. While the game can appear chaotic to the casual observer, once familiar with the basic rules, quidditch is an exciting sport to watch and even more exciting to play. 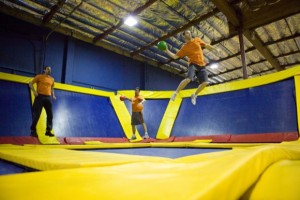 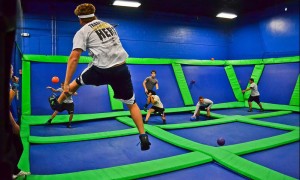 The rules to trampoline dodgeball are similar to traditional dodgeball, with some slight differences ( besides the fact that trampolines allow the players to jump over balls and throw the balls at opponents from up to 10 feet in the air). Two teams of five players each face off against each other at a time. Each game is four minutes in length or until one team has all its players knocked out. If both teams have players at the end of a game, the match goes into sudden death until the first player is knocked out. Simple, but exciting! 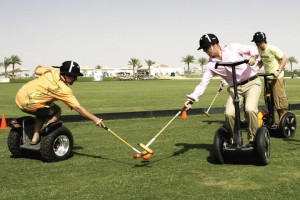 Segway polo is similar to horse polo, except that instead of playing on horseback, each player rides a Segway PT on the field. The rules have been adapted from a combination of bicycle polo and horse polo. Two teams of five players each hit a ball with their mallets, trying to get the ball into the other team’s goal. While it takes a bit of getting used to, if you haven’t spent much time on a Segway before, the simplicity of the game makes it enjoyable for even the most casual of players. 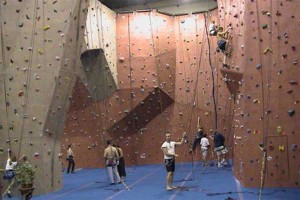 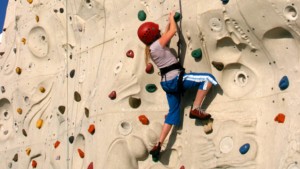 Sounds tough, right? But contrary to what many beginners may believe, climbing is about much more than raw upper-body strength. The success of sending — or completing, as it’s known inside the sport — a route relies heavily on a long list of physical factors, including intricate footwork, lower body strength and lean muscle mass. Although not often thought of as a common form of cardio, ascending walls is a sure way to get your heart pumping, similar to the way climbing stairs or jogging does. A one-hour climb session can burn well over 700 calories. Plus, tricky maneuvers and lengthy reaches often require developing flexibility that wasn’t there before.

Whatever your goals for 2016 are, we hope you make it your best year yet. And if you have any other suggestions our readers might be interested in, leave us a note in the comments section below.

Need team shirts for the upcoming season? Try our interactive Design Studio. You can browse hundreds of options, or upload your own logo.